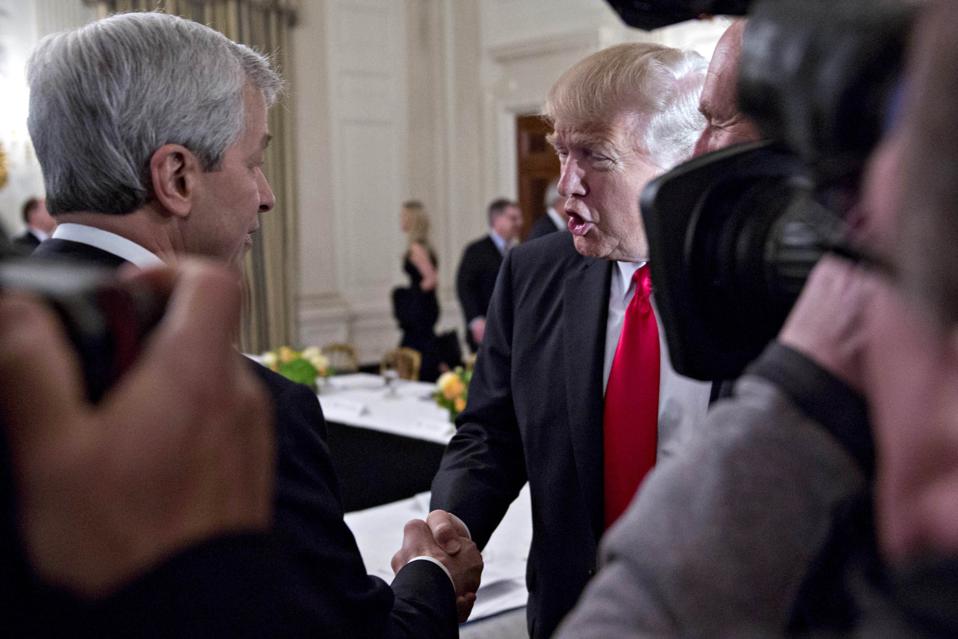 In an onstage interview last week, JPMorgan Chase CEO Jamie Dimon said he felt he had to keep a seat at the federal policy table, irrespective of whether he agrees with the presidents or anyone in government’s views. Was he right? Yes and no. Staying on the team is a valid way of helping a leader, but it’s not the only one.

The interview revisited the situation in August when CEOs spoke out against the President’s response to white supremacist violence in Charlottesville. At the time, top executives resigned from business councils that advise the administration. Their decisions were widely-understood as acts of protest. Stepping down took on so much momentum the President disbanded the business councils. In his interview, Dimon argues the press made too big a deal of this — that councils come and go, and often have a limited life.

What he wanted to emphasize was that he couldn’t understand why anyone would ask him to refuse help to the president. Having once publicly stated, “when you get on the airplane, you better be rooting for the success of the pilot,” Dimon stood by that sentiment. “Can you imagine me standing in front of an audience like this and saying I’m not in favor of the President of the United States being successful? I’d be a traitor.”

What Dimon misses in this perspective is that remaining by someone’s side is only one form of providing help. Looking to timeless stories, you find multiples roles to play that support a person in power. For instance, we could say that Dimon embraces the role of the Dutiful Companion. In history and legend, this character offers service to the leader of the realm by staying close. Companions gently guide people in authority through encouragement and unselfishness. Dimon highlights the value of this form of service by remaining in the circle of advisors.

While certainly a valid route to take, this role is not the only one that provides help to someone in charge. A different tack is that of the Rebel. Often given a bad rap, Rebels support leaders’ ultimate success through expressing dissent. Rebels show courage, and indeed loyalty, through protesting when their leader goes too far off track. This role was enacted by Tesla CEO Elon Musk and Disney CEO Bob Iger, who believed the best way to support the country, and even the administration, was to show the error of its ways in leaving the Paris Accord.

Likewise, Merck CEO Ken Frazier provided a formidable voice of opposition to our society’s leader. Frazier was the first executive to step down from a business council after Trump’s response to Charlottesville. In a defining moment of public discourse, Frazier voiced a call to integrity: “America’s leaders must honor our fundamental views by clearly rejecting expressions of hatred, bigotry, and group supremacy, which run counter to the American ideal that all people are created equal. As CEO of Merck, and as a matter of personal conscience, I feel a responsibility to take a stand against intolerance and extremism.” Unlike Dimon, these leaders underscored the help Rebels provide, by calling on the President to abide by the deeper values of the republic.

Yet a third role to play is that of the Jester. The jester is another universal character, one who serves leaders by calling them out. While deemed “a fool,” jesters use their quick wit to serve as “truth-tellers.” Historically, where others were punished for offensive speech, jesters were free to call it like it was, expressing vivid critique under the guise of a clown. Wise rulers understood that beneath the rhymes and riddles were often warnings. Court jesters aimed their humor at authority figures, helping to keep them in check by shining a light on potentially fatal flaws in their character.

We can see the role of the Jester in the hosts of late night TV: Seth Meyers, Trevor Noah, and Stephen Colbert, to name a few. More poignantly, we see this influential role in the larger-than-life portrayals of Saturday Night Live. As in times past, Jesters Alec Baldwin, Melissa McCarthy, and Kate McKinnon help by poking fun at authority. Their “foolishness” is an indirect way of telling leaders a hard truth. Through political satire, the clown demands a leader to take heed when they lose the North Star of the society they serve.

Dimon is right when he reinforces the imperative to help when called on to serve the leader of the land. It’s important to remember, though, that help comes in many forms. Far from being traitors, people playing all of these roles are patriots, all in their own way.